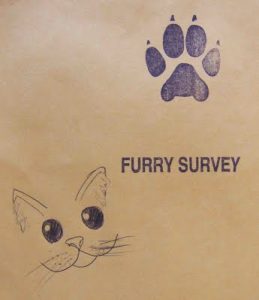 An example of the envelope the Furry Fiesta 2011 ARP Surveys were sealed in. This one was decorated by a furry participant.

As a follow-up to the wildly successful Winter 2011 International Online Furry Survey, we attended Furry Fiesta 2011 in Dallas, Texas two weeks later to administer the same survey. Our purpose in doing so was two-fold: on the one hand, there may be differences between furries online, many of whom have never attended a furry convention, and those who attend furry conventions. On the other hand, there may have been differences between doing the survey online and doing it in-person: online there may be more distractions or less motivation to take the survey seriously; in-person, it’s also likely, being at a furry convention, that participants in the survey were actively thinking about their furry identity, given that they were immersed/ surrounded by the furry community during the weekend of the convention. As such, the results obtained at Furry Fiesta 2011 serve both as a useful comparison group to check for differences between convention-going furries and those online and to allow us to determine how robust our findings were: in theory, if the findings of our online survey were an accurate reflection of furries everywhere, then they should hold relatively well for this sample of furries.

As a brief summary, we found that, for the most part, the data from Furry Fiesta 2011 replicated the findings of our Winter 2011 International Online Furry Survey, supporting the data collected online. Additionally, however, there were several differences of interest in the data collected at the convention, which will be outlined below.

We present below a more thorough explanation of the data from this convention in Q&A format.

Q1: Did the convention-going furries differ from online furries in terms of age?

The furry participants at Furry Fiesta were older than those in our online survey, with an average age of 28.7 years old (compared to 23.0 years old in our online sample). There are a number of possible explanations for this observation. For example, it’s possible that older furries were more likely than younger furries to complete/ return the surveys, suggesting that our obtained results may have been due to sampling bias. For example, it may be the case that older furries have been to more conventions than younger furries, and may have been more willing to stop and complete our survey than younger furries who may have been in a rush to experience a convention for the first time. Older furries may also have been more interested in the idea of furry research than younger furries, and may have been more motivated to turn in surveys. All of these explanations suggest that the average age is younger, but due to sampling bias our sample was a bit older than the actual average age of furries present. It is also entirely possible, however, that the furries attending Furry Fiesta were older – a convention can be quite expensive, and it’s plausible that people in their late twenties (who are more likely to have stable, better-paying jobs) were more able to afford going to a convention than furries in their late teens/ early twenties.

Another possibility, looking at the second figure below, is that there are simply more 30+ furries (“greymuzzles”) in attendance at conventions than online, which would pull the average age upward. It may be the case that age 40+ furries may simply be less active in online furry communities like FurAffinity, but nonetheless actively attend conventions such as Furry Fiesta.

We can only speculate on the reason for the data collected, however, as we do not have the data to confirm or deny any of these possibilities.

What we can say, however, is that between the sample collected at Furry Fiesta and our International Online Survey, it does seem to be the case that the furry community is a relatively young one, with an average age likely somewhere in the twenties. 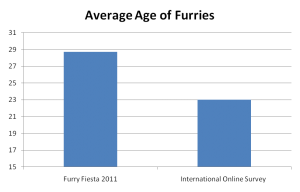 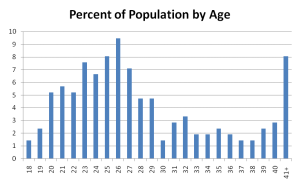 Q2: Were there more females in the convention sample or in the online sample?

There were, by percent of furry population, more females at Furry Fiesta 2011 than in the international online sample. While females made up only 16% of the participants in the online sample, 21% of the furry participants at Furry Fiesta were female. These results may have interesting implications. For example, it is perhaps possible that there are a higher proportion of females who are furry artists, who as a group (artists) may be more represented at a furry convention than online. This would be supported by the data below the following figure (from the International Online Survey, but tentatively supported by the Furry Fiesta survey): females are more likely than males to report economic reasons for being a part of the fandom (e.g. to make money). This is evidence that there may be more commercial female furry artists than male furry artists, which would make it more likely that such artists would be in attendance at a furry convention to sell their art, possibly explaining the presence of more females at furry conventions than in online samples.

Another possible explanation comes from evidence from another question in the Furry Fiesta survey that shows that females are less likely to feel stigmatized for being a furry than are males (third figure below). It thus makes sense that females, who feel less stigma for being furry, would be more likely to be more “public” about their furry identity and attend a furry convention than males.

One could also claim that females were more likely to turn in the survey than were males, although evidence from the control group may rule out that possibility – there was a nearly 50/50 distribution of males (47.5%) and females (52.5%) among the non-furry participant group (though this is a small sample size). These and other possible explanations may account for the difference between the convention and the online numbers, though we lack data to support or reject them until we ask the relevant questions on future surveys. 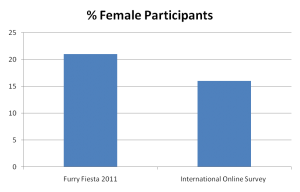 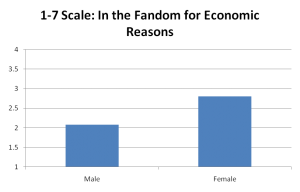 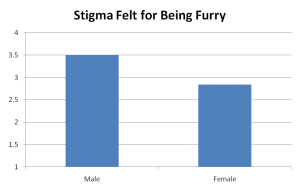 Q3: Were there differences between the online and convention samples in terms of education?

Q4: Were there differences in religion? 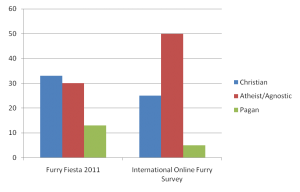 There is not a significant difference between furries online and furries at a convention in terms of how much they rate themselves “part of the fandom”. The figure below suggests that while there may be very slight differences, they are not particularly significant – the overall shape of the curves is approximately the same, suggesting that the two samples are similar enough to be considered functionally equivalent or comparable in their affiliation with the furry fandom. 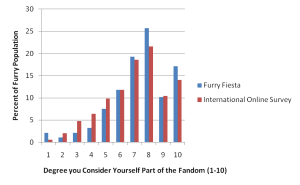 Q6: Have furries who attend conventions been in the fandom for longer than online furries?

Furries at Furry Fiesta report having been in the fandom for longer on than furries in our online sample. Additionally, the second and third figures below suggest that the convention-going furries were older when they first considered themselves a furry and when they first encountered/ became a part of the furry community, as compared to the online furry group. This may be a product, as discussed in Question 1, of older furries at the convention pulling up the average for participants in the Furry Fiesta group. It may also be the case that, for whatever reason, people who are older (and presumably more mature) when they get into the fandom may be more likely to attend furry conventions, though there is no evidence to support or reject any of these possible explanations. 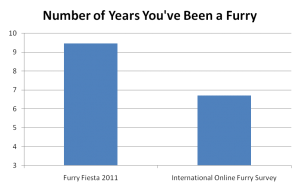 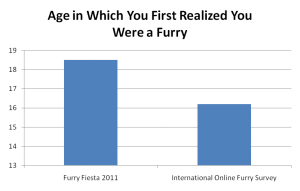 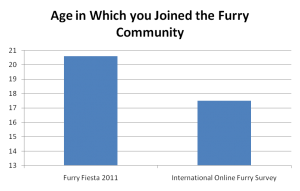 Q7: Are the furries who attend conventions different “types” of furries than those online?

In our discussion of the Winter 2011 International Online Furry Survey results we described the creation of a furry “typology”, that is, grouping furries into one of four “types”, based on how they answered two different questions:

a) Do you consider yourself to be less than 100% human?
b) Would you choose to be 0% human if you could?

Based on the responses to these two questions, there are four possible “types” of furries:

We also showed that there are a number of important differences between the four types of furries on a number of different measures (check back to the Winter 2011 IOFS results to see the implications). Of interest here is where or not convention-going furries were more or less likely to be of one type or another. Interestingly enough, the data suggest that there is a difference: the Furry Fiesta participants were more likely than the online participants to be of Type 3 or Type 4 (specifically, they were more likely to consider themselves less than 100% human). Unfortunately, we are unable to determine the direction of causality of this effect, that is, whether furries that think they are less than 100% are more likely to attend furry conventions, or whether attending furry conventions make furries more likely to consider themselves less than 100% human. It does seem more plausible (given that whether one considers themselves to be human or not seems particularly fundamental and unchanging in a person) that the first explanation is more likely to be true. It may also be possible that furries who consider themselves less than 100% human are more eager to be involved in the research (e.g. “more interested in being studied”), and may be more likely to complete and return their survey. Future research will hopefully help determine which, if not both (or neither) of these explanations is correct. 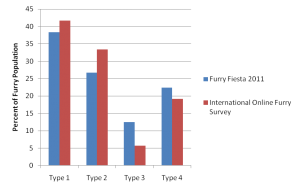 Q8: Are convention-going furries more likely to see furry as a choice?

After comparing the Furry Fiesta furry participants with the online furry participants, we found only slight differences between the two in terms of whether they considered furry to be a choice, with Furry Fiesta participants being slightly more likely to say a furry has no choice in whether they choose to be or not to be a furry. (Note that the “Can” and “Cannot” responses do not add up to 100% because there was a third option – “I don’t know”). 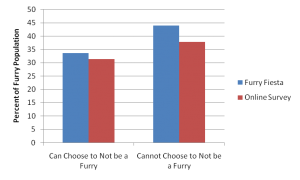 Given that Furry Fiesta is a convention that takes place in Texas, and given the strong conservative ideology associated with Texas, it is worth asking whether or not attendees at a furry convention in Texas would differ from our online participants in terms of sexual orientation. Looking at the two figures below (which ask for the participant’s sexual orientation, both not-in-fursona and when-in-fursona). The results are the same: there are fewer exclusively homosexual furries in the Furry Fiesta sample than there are in the online survey (and an overall trend towards slightly more heterosexuality in general). 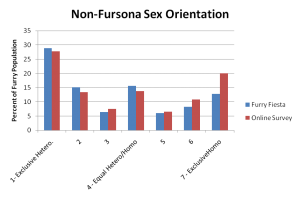 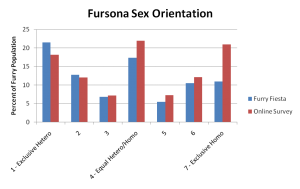