In the social sciences, sex and gender are recognized as distinct concepts. Sex is typically conceptualized as an element of a person’s biologicy, whereas gender, which is socially constructed, refers to aspects of a person’s psychology (e.g., behaviour, self-perception). While a person’s gender identity is congruent with their sex in many cases (cis-gender), it is possible for their gender identity to differ from their sex (transgender), or to fluctuate fluidly over time.

As our awareness of sex and gender issues continues to evolve, we have continually striven to find better ways to meaningfully assess these facets of a personality without unnecessarily constraining participants to dichotomous responses or responses that do not fit with their lived life. To this end, we adopted new measures to assess this facet of identity1, significantly building upon the methods used in previous years 2 while avoiding the pitfalls and mistakes we commonly found ourselves running into. While far from the last word on the subject, the present measure does take into account much of the invaluable feedback provided to us by participants from past studies.

Participants were asked to check off which of a number of options they felt described them. They were free to check off as many or as few options as they wished, and were given the option to write in their own option at the end. 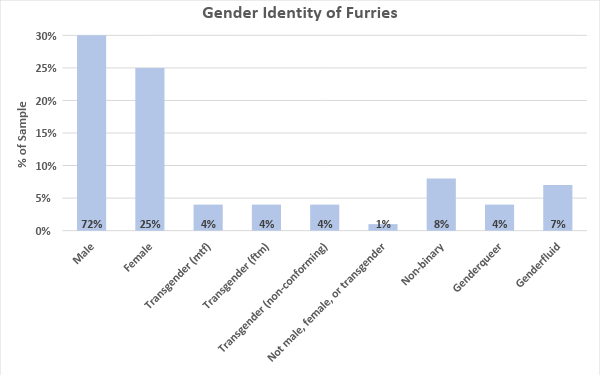 We next assessed participants’ gender identity,3 giving them a series of options to choose (including the abilitiy to write in their own option), and allowing them to choose as many options as suited them (which is why the results add up to greater than 100%). The results found that the majority of furries identify as male, although one-quarter of furries identify as female. Transgender, genderfluid, and non-binary furries are also present at rates considerably higher than observed in the general population.

In an effort to estimate approximate proportion of furries in the fandom who identify as transgender, participants were asked to pick one option from a choice of six which best described them (with an option to provide their own answer if appropriate).4This was done to avoid “double-counting” anyone who identified with more than one category. As the figure above illustrates, 12.2% of furries fall within the broad category of “transgender”, a number more than 20 times higher than that typically observed in the general population. In short, the data from these questions illuminates the importance of considering transgender, genderqueer, and other non-binary gender identities when understanding the composition of the furry fandom, as they make up a considerable proportion of the fandom. 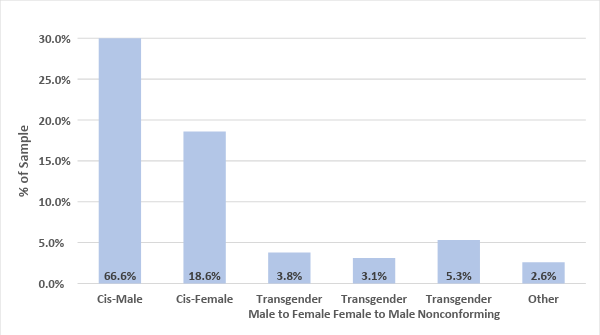 Consistent with past research5, the data suggest that self-identified males were roughly three times more prevalent in the fandom than self-identified females. Even more fascinating, however, is the fact that the number of transgender furries is, all told, nearly ten times higher than that estimated for the general American population (estimated at 0.6%6). It should also be noted that a considerable proportion of the furry fandom indicates that they do not fall within a traditional binary gender dimension, considers themselves to be genderfluid, or to be without a gender identity altogether.

Our best approach, to date, is encompassed in some of our most recent studies in 2021 and 2022. Across three studies, we presented participants with a forced choice from a set of six options that attempt to capture a range of gender identities while also differentiating cisgender from transgender furries and allowing for people who fall outside of these categories with the options “genderqueer” and “other.” While there’s no universally agreed-upon definition of genderqueer, it most commonly refers to people for whom their gender identity falls outside of conventional attempts to describe or define it, including concepts such as genderfluidity and non-binary. The results are shown in the table below. The data reveal some pretty striking findings, not the least of which is that upwards of one-quarter to one-third of furries do not identify primarily as cisgender.

In prior studies7, we compared the furry fandom to three other fandoms: the online anime fandom, the anime convention fandom, and the fantasy sports fandoms. The proportion of furries self-identifying as male is similar to the proportions shown in the online anime and fantasy sports fandom, but far more male than the convention-going anime fandom.

While the ratio of self-identified males to females within the furry fandom does not appear to differ significantly from other online fandoms, the furries in this sample were significantly more likely to identify as transgender or genderqueer/non-binary (indicating that their gender identity fluctuates or does not fall on the Man-Woman dimension), compared to the other fandoms in the study, as the figure below shows8. Further research may show whether this indicates fandom-level differences in the inclusiveness of the groups studied or perhaps a preferential pull toward some other aspect of the furry fandom.

Interestingly another study of furries9 revealed that those furries assigned female at birth were more than twice as likely to identify as transgender (5.5%) and genderqueer or non-binary (18.9%) than furries assigned male at birth (2.1% and 4.1% respectively). The reason for this considerable difference is not yet known, and likely to be a topic for future research.

As a whole, the data collected through our current survey methods supports our prior findings: across the fandoms the IARP has studied, the furry fandom may be the one most open to, or accepting of, people who eschew or challenge traditional gender norms. This may, in part, have to do with the content of the furry fandom, which allows a person’s created fursona to be any species, age, or gender, they wish—something that may appeal to people who otherwise feel limited in their ability to express their felt gender identity. This possibility is a topic of interest for future research.