For a quick 3-minute read explaining the furry fandom and debunking some of the current and historic misconceptions, Dr Roberts recently wrote an article for The Conversation: 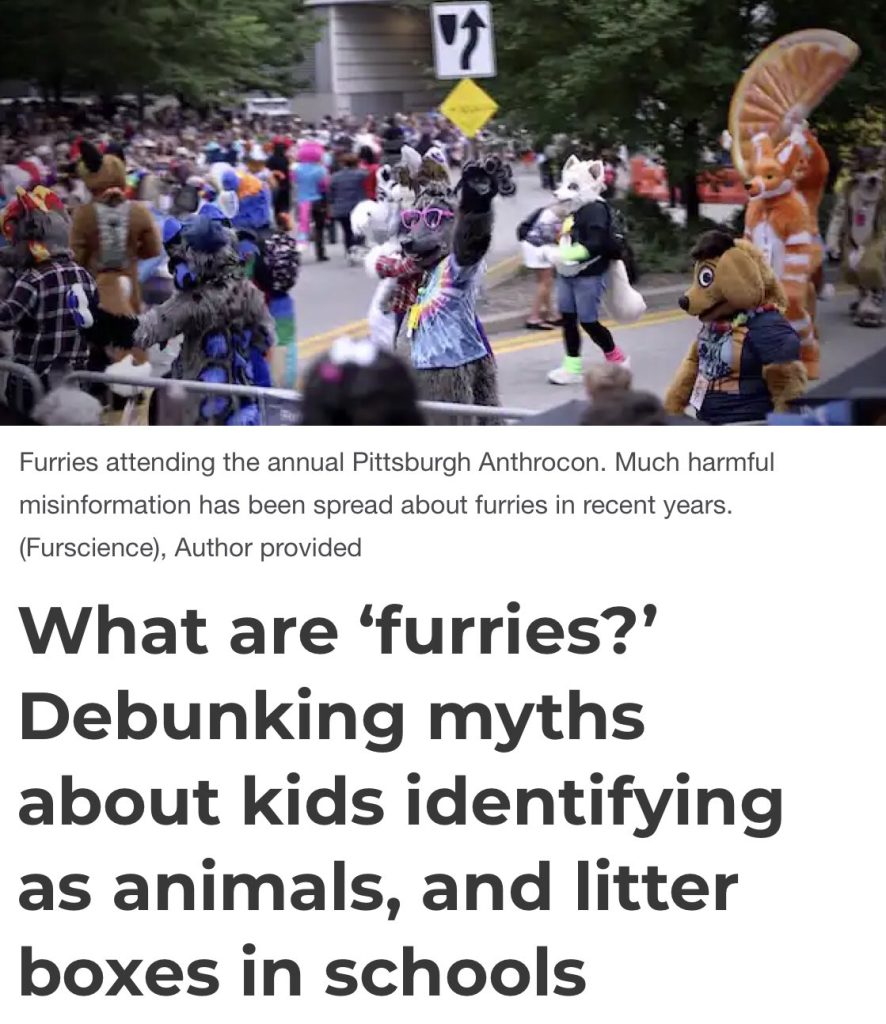 Listen to a Podcast:

If listening is your thing, Dr Plante recently appeared on the Cult or Just Weird Podcast: S4E16 – The Fandom (Furries & Fur Science). 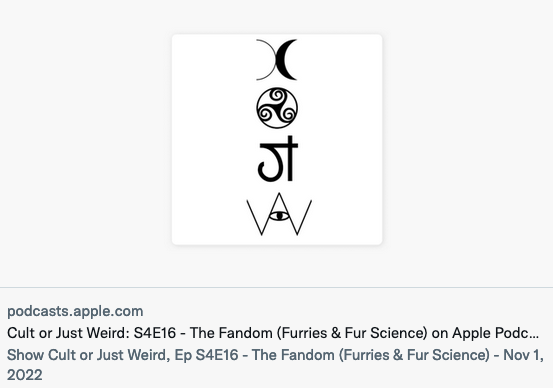 The term furry describes a diverse community of fans, artists, writers, gamers, and role players. Most furries create for themselves an anthropomorphized animal character (fursona) with whom they identify and can function as an avatar within the community. Some furries wear elaborate costumes (called fursuits) or paraphernalia such as animal ears or tails, or represent themselves as anthropomorphic animals in online communities such as Second Life.

Furry fandom is an inclusive term that describes the community of furries that span online, local, and international settings. The furry fandom is global, with hundreds of local groups existing worldwide and dozens of conventions held annually.

A small subset of furries (~10%), called “therians,” believe they are spiritually connected to animals, are less than (or more than) 100% human, are an animal trapped in a human body, or were an animal in a former life. Otherkin, like therians, feel spiritually connected to non-human species, but the species extend to mystical species, e.g., dragons, griffons, and minotaurs.

Many of the negative stereotypes about the furry fandom were empirically tested and found to be unsubstantiated. When compared to a control group, furries were significantly more likely to have a history of being physically and verbally bullied, a difference particularly prominent during adolescence (61.7% vs. 37.1%). Our studies indicate that 65% of furries say that they have told almost no one in their family about their furry interests, and approximately 70% say that they have told almost no one they see in their day-to-day life (e.g., work). Approximately 60% of furries agreed that they felt prejudice against furries from society, while approximately 40% of furries felt that being a furry was not socially accepted. The more strongly a person identifies as a furry, the more likely they are to feel that they are treated worse by society for being furry.

When seeking counseling or therapy for unrelated conditions, many furries report that they were driven away by therapists who ignored the problems they were experiencing (e.g., depression) and instead focused on “being furry” as the problem. Our studies also show that other fan groups dislike furries, so furries’ fears are founded.

Despite a history of bullying and significant social stigma, our research shows that furries benefit from fandom participation and interaction with like-minded others in a recreational environment, which is associated with greater self-esteem and greater life satisfaction. Despite negative stereotypes that pathologize or seek to “explain” furries in clinical terms, furries do not significantly differ from a control group (general population) with regard to their self-esteem, psychological well-being, or relationship satisfaction and, in fact, furries were more likely than the control group to have a better-developed, more coherent and stable identity.

Contrasting stereotypes that portray the fandom as being simply a fetish, the most-cited draw to the furry fandom is its sense of belongingness, recreation, and escape from the mundaneness of daily life, as well as its appreciation of anthropomorphic art and stories. As a result of interacting with a community that values tolerance, acceptance, and open-mindedness, interaction with the furry fandom is associated with global citizenship—a sense of responsibility to act toward the betterment of the world (e.g., environmental concerns, valuing diversity).

Most furries represent themselves and interact with the fandom using fursonas that represent idealized versions of themselves—usually more outgoing, sociable, extraverted and confident than themselves. Our research suggests that to the extent that furries identify with these idealized versions of themselves, they experience greater self-esteem and life satisfaction. Our longitudinal research is currently testing if spending time as their idealized fursona leads to positive changes in furries’ own personality. Furries, while having more active fantasy lives, are no more likely than the general population to engage in pathological forms of fantasy (e.g., delusion, escapism, excessive fantasy), and are more likely than members of the general population to engage in fantasy for healthy, beneficial reasons, including inspiring creativity, social interaction, and recreation.

For even more more nuance and for those really into statistics and peer-reviewed articles from Furscience on all things Furry, be sure to check out our Research Findings and our list of Publications.