On average, about half of a furry’s friends are furries themselves. This is comparable to members of other fandoms, although convention-going anime fans report having significantly more friends who are also anime fans. This may be due, in part, to the fact that the interests of anime fans are more mainstream than those of furries, making it easier to find friends in the fandom and publicly share one’s interest in anime.1

In a recent study we asked participants to what extent their friends and acquaintances tended to be furries themselves. Most furries indicated that some or most of their friends were furries, though a small number indicated that none of their friends were furries. This suggests that furries, at least convention-going ones, tend to surround themselves with others who share a similar interest. This, it should be pointed out, is not at all unique to furries as a group. 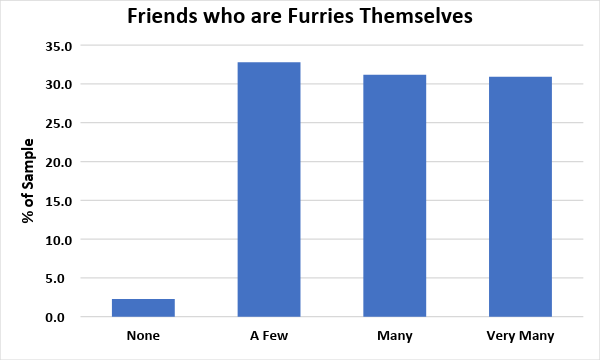