Furry is not a Fetish 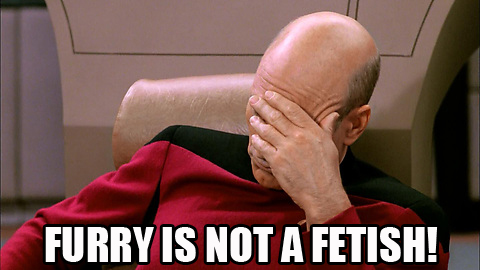 The Oklacoma City news site The Lost Ogle recently ran a piece in response to the cancellation of Oklacon. The piece itself is generally sympathetic to furries and appears to take their side against the banning of Oklacon from Oklahoma State Parks.

On the one hand, we should all be relieved that media coverage of furries has been on an upswing in the past decade, where furries were characterized unsympathetically as freaks; indeed, most furries can almost reflexively rattle off the names of television shows, magazines, and websites that contributed to the stigma furries have feared and felt from the general public whose knowledge of furries is little more than what they’ve heard from these sources. It would seem the media have grown tired of the same old narrative that reads “Look at these freaks in costumes! Aren’t they just so perverted and weird? Can you believe how bizarre their sex lives are?” Instead, modern media pieces about furries read more like this: “It’s unfortunate the way society has treated these harmless sexual deviants. We, for one, are open-minded enough to say ‘go ahead and do whatever crazy sex thing you want!”

I think many of you will agree that while the latter story comes off as kinder, it nevertheless comes off as a bit back-handed. And the reason why is pretty apparent when laid out this way: the media, despite wanting to be sympathetic to furries, still trivialize the furry fandom as a fetish.

To put it another way: the media have no idea what furries are. As such, they rely on the same inaccurate stereotypes that plagued harmful news stories a decade ago. Look at the piece from The Lost Ogle again. How are furries described in the piece?

A furry convention…is where furries gather to talk, interact, mingle, and have sex with other furries while dressed in their costumes.

I feel really bad for our furry friends. Most of them are just your typical hard-working, regular old people who like to dress up in animal costumes, camp and play a game of Frisbee or, uhm, late night Werewolf.

See what I mean? The narrative has become “yeah, they’re perverted freaks, but I’m okay with them being as weird as they want.” That’s fine, except the premise is flawed: the furry fandom is, first and foremost, a fandom. A collection of people who gather because of a shared interest in art, stories, shows, music, costuming, etc… that features anthropomorphic themes. While furries have sex lives like anyone else, and their interests in anthropomorphism can influence how their sex lives manifest, it is nevertheless incorrect to describe furries by their sex lives.

To see why this is a problem, take an analogous fandom: the video game fandom. Imagine if reporters described a convention like PAX as “A place where people who have a video game fetish can meet up to have sex with one another while they play video games, and that’s okay if they want to do that, because we respect their decision.” Video gamers would be outraged, and rightly so! Not because they deny having sex lives, or because the story is saying what they’re doing is wrong, but because it’s inaccurate –fans of video games are defined, first and foremost, by their shared interest in gaming. It’s why video gaming is a fandom, not a fetish.

As long as the media continue to inaccurately define furry as a fetish, a sexual activity, or even simply as “people who wear costumes” (in fact, fewer than 25% of furries own a fursuit), reports such as these, no matter how sympathetic they are to furries, will continue to perpetuate the stereotypes that drive furries to hide their interests from their friends and family.

But there is something wrong about reducing the complexity of a fandom, be it video games or furries, to “just a weird sex thing”. If a reporter can’t even properly define the group they’re doing a story about, it’s hard to believe the authenticity of their sympathetic view of the group.