We assess relationship status of furries by asking participants to indicate, by checking from a list of all that apply, their current relationship status. The results below are fairly representative of results obtained in any given study,1 and show that there are significant differences in the relationship status of males and females (as assigned at birth): males are three times more likely to be single than females, while females are 2-4 times more likely to be dating, engaged, married, or in another type of relationship. One hypothesis for this difference is based on the idea that furry women are more likely to enter the fandom by way of a significant other; given the high proportion of men in the fandom,2 women may feel they need to justify their presence in the fandom (i.e., being an artist or friend of a furry), an issue discussed in greater depth in Section 12. 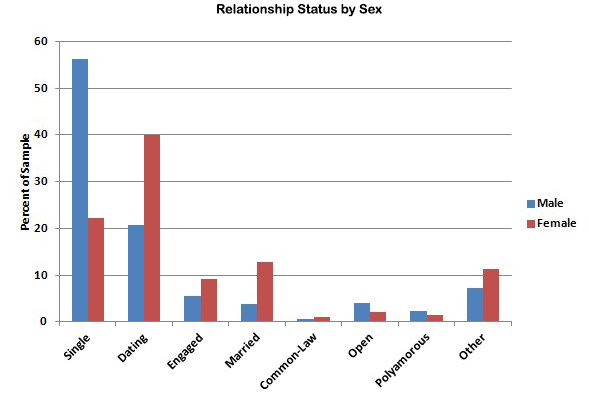 An international study conducted online3 suggests similar results, although this data was not broken down by the sex of the replier:

When interpreting differences in relationship status across fandoms, age likely plays a significant factor in these results; older participants are more likely to be married, particularly when the age difference between the fandoms amounts to the difference between people in their early 20s and their early 30s. This would explain why fantasy sport fans, the oldest fan group in the sample,4 are the most likely to be married and, by extension, the least likely to be single. This similarly explains why online anime fans, the youngest group, are the most likely to be single and not in a long-term dating relationship. Furries (a convention-going sample), and convention-going anime fans were comparable in their rates of dating, although the A-Kon sample was more likely to be single than furries were.5

This brings us to another category of interest: open and polyamorous relationships. While we acknowledge that these are two distinct (if related) phenomena, results for the two items were comparable, and so they were grouped together in the following figure. As a group, furries are far more likely to engage in open relationships or polyamory than the other groups. One possible explanation for the high rates of polyamory in the furry fandom is that the fandom encourages norms of openness and acceptance,6 which may make it a particularly appealing, non-judgmental place for people who are in polyamorous or open relationships (which are often stigmatized in the general population). Alternatively, the open and accepting nature of the furry fandom may lead furries to consider open relationships and polyamory where, in other contexts, they might otherwise not. Further research is needed to clarify the possible mechanisms underlying these differences.

When furries were asked open-ended questions about the effects of the furry fandom on their relationship,7 qualitative analysis revealed ten primary relationship benefits, in order of frequency:

Responses to an open-ended question about negative effects of the furry fandom on relationships showed the following nine primary drawbacks, again listed in order of frequency. It should be noted that positives and negatives were listed at a ratio of about 5:1, and negatives were more common among participants whose partners were not furries.

“Drama” or conflict in the fandom

In an online survey8 participants were asked questions about their relationships and relationship satisfaction and furry media consumption. Generally, furries were far more likely to say that being a furry has been beneficial to their relationship and that they were far more likely to argue with their partner over non-furry things than furry-related things. Overwhelmingly, furries reported that their involvement in furry-related activities rarely leads to conflict with their partners (with a greater tendency for conflict for furries whose partners are not furry.

This study allowed us to test (and find evidence for) an unusual model showing hte relationship between furry content consumption and relationship satisfaction. Specifically for participants whose partner is not a furry, greater furry content consumption is associated with the perception that furry is helping their relationship, leading to greater relationship satisfaction. This same pattern is not found for furries whose partners are also furries. One possible explanation is the fact that furries who are able to consume furry content despite having a non-furry partner may be appreciative of this (as opposed to being with a partner who is opposed to their openly consuming furry content), which may lead to the perception that being able to be furry is helping their relationship and, ultimately that they have a more satisfying relationship. More research is needed to further investigate this possibility.