One of the first questions we ask in any of our studies is the age of the participant. The purpose of this is two-fold: first, age can be an important variable, predicting a number of physical, psychological, and social outcomes. Second, due to ethical restrictions, the IARP is unable to study minors (as parental consent would be required, something we cannot reasonably expect to obtain if a person has not “come out” to their family as a furry).

As the table above and figure below shows, furries tend to be relatively young, with the majority of adult furries (over the age of 18) being in their early-to-mid-twenties, and nearly 75% of furries being under the age of 25. 1 Convention-going furries tend to be, on average, a bit older than furries in our online samples. This, we believe, is due to the fact that conventions can be expensive to attend (e.g., travel costs, hotel), requiring a level of expendable income and long-distance transportation more available to those with stable careers, who are more likely to be in their mid-twenties than their late teens and early twenties. 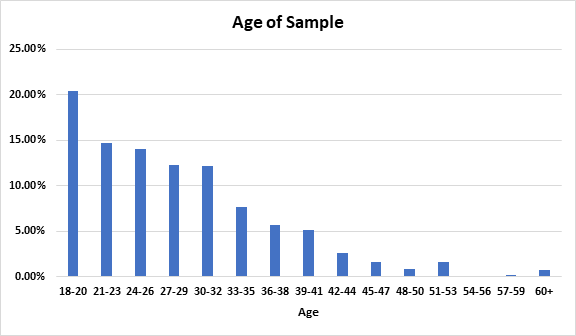 The term “greymuzzle” is sometimes used by furries who have been in the fandom for significantly longer (12.3 years vs. 6.2 years, on average) or who are older than the average furry (e.g., 42.2 years old, on average). Approximately 9% of furries self-identify as greymuzzles.2 They are comparable to other furries in most regards, not differing in their well-being or in their identification with the furry fandom. Greymuzzles do differ on a few variables:

a. On average, it took greymuzzles much longer to discover the furry fandom after developing furry interests (9.5 years vs. 4.6 years), likely a product of internet accessibility.
b. Greymuzzles are 3-4 times more likely to self-identify as therian.
c. Greymuzzles are less likely to have an interest in roleplaying activities.3

The IARP is currently investigating the reason for a significant drop in the age of furries, particularly after the early 20s. One possibility is that, as people age, factors such as families and careers may reduce the amount of time people can devote to their hobbies. Alternatively, it may be the case that as furries spend time in the furry fandom, they form close friendships and, after a while, find themselves interacting with those friends outside of furry contexts.

On average, furries are older than anime fans (both convention-going and online), but younger than fantasy sport fans.4 Whether this is due to the fandoms targeting different age groups, requiring different amounts of resources to enter (e.g., money to spend on fantasy sport leagues), or other factors remains a topic of interest for future research.

In addition to assessing actual age, the IARP has also studied subjective age—the extent to which furries feel younger or older than they actually are. As illustrated in the figure below, the “peak” of subjective (felt) age is younger than that of objective (actual) age. 10% to 15% of furries identify their felt age as being under the age of 18, while comparatively fewer identify a subjective age older than 40. The average actual age of furries is significantly higher than the average subjective age of the same furries (28.0 years vs. 25.3 years), about 6.9% higher on average.5

Finally, this figure illustrates that furries in the oldest quartile rate themselves, on average, 24.5% younger than their actual selves, while furries in the other quartiles feel significantly less young.6

To test this, we asked participants a series of questions about their willingness to interact with furries of different age categories (18, 25, 35, and 55 years old) in different contexts (e.g., willingness to talk to, get a ride to a convention with, share a room at a convention with, get advice from, interact online with). We averaged across each context to get an overall score from 0-3 indicating participants’ openness to interacting with furs of that age group (higher scores = more open).

We then divided participants up into three age categories: Under 25, 25-34, and 35+. Below, we show the results for each of the age groups. 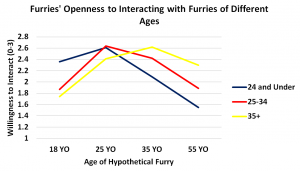 These data are too preliminary to suggest that some sort of hostile, intentional ageism is going on, and it seems likely that furries simply prefer to congregate with those of a similar age group because they share similar interests (e.g., grew up watching the same shows, got into the fandom at around the same time) and are at similar points in their lives. Future research is needed, however, to test this hypothesis.

In an online study, we asked participants about potential generational gaps and factors which may or may not contribute to feelings of disconnection with the fandom, feelings that the fandom has changed over time, or negative feelings toward others in the fandom based on their ages. 8

In general this survey suggested that:

The most commonly cited issues contributing to felt gaps/divides were, in order:

episode 🔗 for our browser listeners:

Thank you SO MUCH to Dr. Plante of @furscience for talking to us about the furry community. We learned things we didn't even know we didn't know. Thank you!

Have you ever tried to explain “furries” to someone whose only exposure is misinformation? Furscience helps to explain the furry fandom in this 3 minute read. https://theconversation.com/what-are-furries-debunking-myths-about-kids-identifying-as-animals-and-litter-boxes-in-schools-193908?utm_source=twitter&utm_medium=bylinetwitterbutton via @ConversationCA @UWaterloo @renisoncollege

episode 🔗 for our browser listeners:

Thank you SO MUCH to Dr. Plante of @furscience for talking to us about the furry community. We learned things we didn't even know we didn't know. Thank you!