In a number of studies we’ve asked participants to indicate their sexual orientation. Recognizing that for many people sexual orientation is complex and difficult to plot on a single dimension, we have over time provided additional options (i.e., asexual, pansexual), or changed the way we presented the question to allow more nuanced responses.1 The result of this change was illuminating. In a recent study, we moved from a traditional 7-point Kinsey scale to a simple, categorical approach, giving participants several options to choose from. 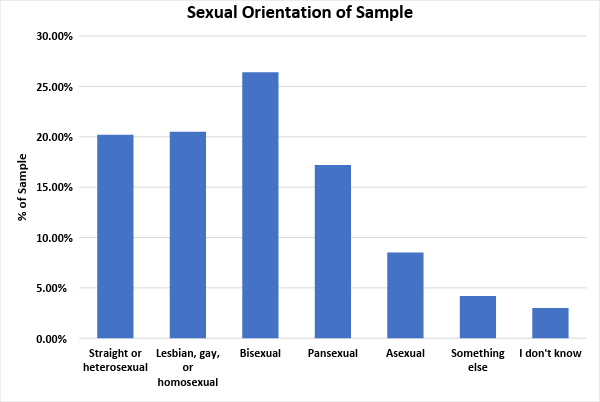 In prior studies, heterosexuality, while never a majority, was always the most commonly chosen option. When participants were able to chose labels, bisexuality emerged as the most frequent sexual orientation, with only about 20% of furries self-identifying as heterosexual. It is also worth noting that other orientations, such as asexuality, emerged as fairly prominent in the fandom, with about 1 in 11 furries identifying as such. In prior studies2 we’ve asked participants to indicate their sexual orientation using a 7-point scale adapted from a traditional Kinsey scale, ranging from “exclusively heterosexual” to “exclusively homosexual” along a single dimension.3 Recognizing that many people do not consider their sexual identity to fall within this single dimension, we provided additional options (i.e., asexual, pansexual, and an option to write in their own option). It should be noted that many of the following analyses using two or more variables, the analyses often require continuous variables and, in such instances, only the data from the 1-7 scale is used. This is not a statement about alternative sexual orientations, but rather, is a byproduct of the type of analysis used and, wherever possible, we present data on other sexual orientations. In some instances, rarer sexual orientations are presented as an aggregate “other” category to protect the identity of those who may otherwise be identifiable for having provided a unique or rare response.

In a final analysis, the fan groups differed in the nature of the relationship between sexual orientation and sex (that is, people assigned “male” or “female” at birth). In the fantasy sport group and both anime fan groups, females were more likely than males to self-identify as homosexual (as indicated by higher numbers on the sexual orientation scale). In contrast, in the furry fandom, males—not females—were more likely to self-identify as non-heterosexual.

Given that only about 20-30% of furries self-identify as exclusively or predominantly heterosexual, it may be possible that they construe themselves as a minority within the furry fandom.  Anecdotal evidence suggests that some heterosexual furries may feel stigmatized or ostracized within the furry fandom as a result of this minority status. Alternatively, it may also be the case that members of other traditionally minority sexual orientations (e.g., lesbian, gay, bisexual, queer persons) may nevertheless feel stigmatized within the fandom because they, too, constitute minorities within the fandom.

To test both of these possibilities, we asked furries whether they believed that straight and LGBQ people were accepted within the furry fandom (as separate questions).8

In line with our asking of an analogous question about gender diverse people within the fandom,9 we then compared the responses of straight and LGBQ participants to these questions. Analyses revealed that the two groups did not differ with regard to either question: both groups strongly agreed that both straight and LGBQ persons were accepted within the furry fandom, although both groups did more strongly agree with this notion with regard to LGBQ people (6.48 / 7.00) as compared to straight people (6.14 / 7.00). In a later study 10 participants were given a series of questions about acceptance of various sexual orientations within the fandom, and asked to both guess the extent to which the average furry was accepting of each sexual orientation within the fandom, and then to provide their own rated acceptance of each orientation. The data reveal two interesting trends. First, furries’ actual rates of acceptance were considerably higher than predicted. Put another way, furries expect the average furry to be less tolerant of other sexual orientations than they, themselves, are – furries underestimate the tolerance of other furries. Second, and perhaps even more interesting, this effect seems to be largest with respect to asexuality and heterosexuality: Furries believe that other furries are somewhat less tolerant of asexual and heterosexual people in the fandom, despite furries being virtually identical in their actual acceptance of all sexual orientations in the fandom. These data go against the often-held belief among some in the fandom that straight furries are not accepted or are unwelcome in the furry fandom. 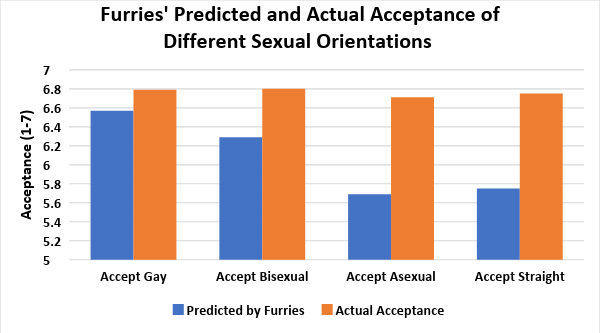 Additionally, we conducted a series of analyses aimed at testing whether there were measurable differences between straight furries and non-straight (e.g., asexual, gay, bisexual, pansexual) furries on a number of different variables. 11 The results of these analyses are as follows (keeping in mind that these are only average tendencies, and do not reflect differences for all straight / non-straight furries):

In short, evidence suggests that, in general, people are accepted in the furry fandom regardless of their sexual orientation. While there is sometimes the perception that members of the LGBTQ community are the most strongly accepted members of the fandom, evidence suggests that, while there are indeed significant differences between the straight and non-straight members of the fandom, furries are generally accepted and welcomed within the community regardless of orientation. It may also be the case that the openness and acceptance of the furry fandom may allow people who consider themselves to be exclusively heterosexual to explore aspects of their sexuality they may otherwise not consider in other contexts. Ultimately, future research is needed to explore the nature of these interesting gender and fandom differences in sexual orientation.

For all of you who received the Furscience research cards @anthrocon remember to check out the study!

Dr. Fein is giving an update on some of our Autism in the fandom and Therian/Otherkin research

Coming up at noon! Furscience: Q & A Session at Anthrocon 2022 https://sched.co/11ycz @anthrocon @sched