While the definition of therian may differ depending on who you ask, it can be loosely defined as people who identify as a non-human animal (see 7.2, Animal Identification for more on this). Knowing the prevalence and characteristics of therians is important in our research on furries, as furries and therians are often conflated in media discussions of furries, which frequently leads to misconceptions about what furries actually are.1

In our studies, we typically avoid imposing a definition on participants, allowing them to decide for themselves if they identify with the term, whatever it means to them. We present participants with lists of terms (e.g., furry, therian, otherkin, brony) and ask them to check off any boxes that apply to them. The result is a sample consisting of furries who do not identify as therians, furries who also identify as therian, and therians who do not identify as furries.

Across samples, the proportion of participants who identify as therian has ranged from 5% to 20%. with the most recent sample containing 7% therians.2

Further breakdown of the data, such as that in the figure below,3 illustrate that the therians in our samples (e.g., online or at conventions) are 2-3 times more likely to not identify as a furry as they are to identify as a furry. It should also be noted that approximately 5% of respondents also identify as otherkin, a group comparable to therians, with the exception that the range of entities they identify with is broader and includes non-existent species/entities (e.g., dragons).

Other studies suggest that the number of therians in the furry fandom may be an underestimation; the 11%-17% estimate of therian prevalence in the fandom is about half of what one would expect based on data showing the number of furries who don’t feel completely human.4

This may be explained, in part, by the fact that 27.1% of participants in one study indicated that they did not know what a therian was; as such, it’s possible that some of these participants may fit the definition of a therian without knowing about the term (and, anecdotally, this has been the case—at several of our data presentations, we’ve been approached by people afterward telling us that they’ve been a therian without knowing that there was a word to describe it.)5

Given the possibility that a person may identity with a non-human animal species without knowing the term “therian”, we asked a number of questions to assess the prevalence of therian-related experiences within the fandom.6 In the figure below, which asks about therianthropy (blue bars) and otherkin (orange bars), it’s clear that the vast majority of furries do not have either of these beliefs, though more than 7% of furries indicate at least some degree of agreement with these beliefs. Below, we find that while most furries disagree with the idea that they are not entirely human, many do wish that they could become something other than human, even if that “something” is not entirely 0% human. 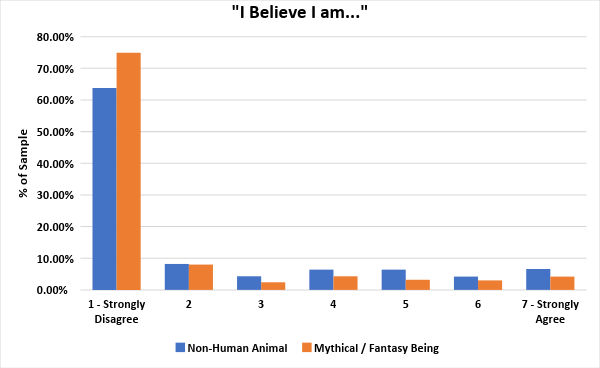